Our hair is partof our anatomy; like most other mammals, it protects our skin from weather and reflects our general health, thus signaling desirability for potential mates. But it’s so much more; it is an extension of our personalities, a visible beacon of who we are. Like clothing, we can choose to modify our hair to send a certain message out into the world.

It’s easy to forget just how incredible hair is until stories like these come along, to remind us that our perfectly combed coiffes are really so much more and sometimes so much less than something to style each day.

Everyone’s heard the old adage that gentlemen prefer blondes. While it’s often laughed off (especially by all the brunette and red-headed ladies who are perfectly happy in their relationships), the saying might actually have had some truth to it. It’s estimated that blonde hair first emerged as a genetic mutation in Europe during the last ice age, about 11,000 years ago.

It then spread like wildfire, eventually becoming one of the common hair colors in the Northern Hemisphere. One scientific explanation for why blonde hair evolved so quickly comes from a Canadian anthropologist, who claims that the uniqueness of blue eyes and blonde hair in some European women made them stand out from their peers. In a time of intense competition for a small number of males, the blondes had more genetic differences than the brunettes, and thus bred more often.

Not the Hair Etching You’re Thinking Of

Professor Martyn Poliakoff of the University of Nottingham is a well-loved figure in the faculty of nanotechnology. He’s a pleasant fellow with a head full of wiry white hair, looking not unlike Albert Einstein.

So for his birthday in 2010, the staff at the Nanotech center took one of his hairs, focused it under a powerful ion beam microscope, and fired tiny gallium ions at the strand to carve the periodic table of elements into it. The entire table was only 100 microns long, or 0.000039 inches. Truly, the present for the professor who already has enough bottles of premium Scotch!

If you’ve ever had to patiently try to de-tangle your hair or, heaven forbid, had to do so for a small child you know just how frustrating it can be. But for a very small portion of the population, every day is a bad hair day permanently. They have an extremely rare congenital condition called Un-combable Hair Syndrome. 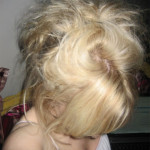 While many will scoff, it’s not a farce; it’s an actual structural anomaly that results in silvery-blonde hair which cannot be combed flat, no matter what. The hair shaft itself has lengthwise grooves running through it, which causes stiffness and haphazard arrangement of the locks. The condition is usually present in childhood, and many improve once they hit puberty.